Sweat at the Huntington Theatre 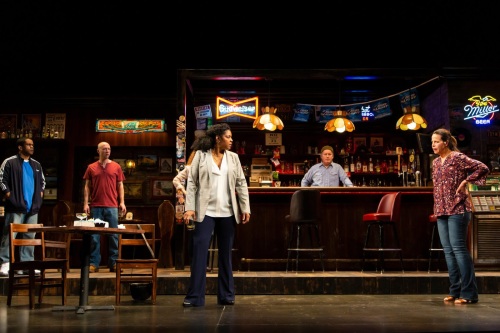 Lynn Nottage first began conceptualizing her award-winning play Sweat when she conducted a series of interviews in Reading, Pennsylvania in 2011. Her time in this town inspired the play’s small, poverty-ridden, American town setting. The play centers around a group of childhood friends and their sons, who are all co-workers at a factory that has slowly begun to shut down. Sweat shifts between 2000 and 2008 to show how the town and its residents evolve over the decade. It touches on topics such as racial tension, immigration, the opioid epidemic, neo-Nazis, American manufacturing, and toxic masculinity. The play led Nottage to win a Pulitzer Prize and be nominated for a Tony Award for Best Play.

A new production of Sweat is playing at The Huntington Theatre in Boston, MA. The Huntington is one of Boston’s two major regional theaters (along with the American Repertory Theatre), and has sent numerous shows to Broadway over the years. Sweat brought the same level of high-production quality one should expect from The Huntington.

With its realistic set and amazing cast, the audience is able to connect with the story and empathize with its complex characters. Performances delivered by Tyla Abercrumbie and Brandon G. Green allow Nottage’s script to truly shine. It is an undeniably solid production of a well-written show that tackles some of the most pressing issues facing our country today.