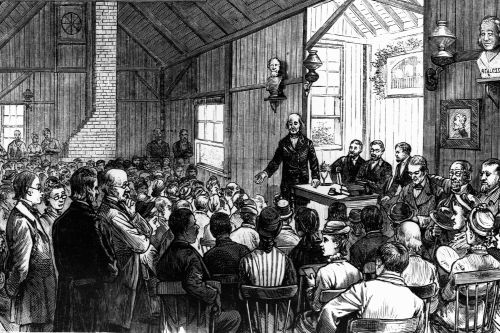 Transcendentalism was a literary, philosophical, and religious movement that began in the 19th century, based in New England. Followers of this movement believed that independent, self-reliant human’s coexistence with nature is the utmost state of existence. Transcendentalists thought that society and institutions had corrupted individual’s purity and that only through cohabitation with oneself in nature can equilibrium be restored. The natural, glorious landscape of New England- specifically in Massachusetts, inspired transcendentalist writings.

The head of the transcendentalist movement came to a head in Boston. The prevalence of literacy, sense of individualism, and tenacious Protestant beliefs held in New England at the time made this area the perfect breeding group for transcendentalism to flourish. Frothingham describes how the character of New Englanders were the perfect practitioners of transcendentalism’s ideas. “The Unitarians of New England, good scholars, careful reasoners, clear and exact thinkers, accomplished men of letters, humane in sentiment, sincere in moral intention, belonged, of course with individual exceptions, to the class which looked without for knowledge, rather than within for inspiration.”

The transcendentalists were so cemented in their belief of coexistence with nature that they collectively bought and temporarily lived at Brook Farm in West Roxbury, Boston, though most of their correspondences otherwise happened in the city. Commonly the transcendentalist club held meetings in Boston’s Beacon Hill at the Boston Athenaeum where the writers would engage in research at the Athenaeum’s library. Close by is the Parker House, located at 60 School Street in Beacon Hill. The transcendentalists would gather at the Parker House and host lively round table discussions, completely with freely flowing discussion, spirits, and food.

Finally, one of Boston’s most well-known landmarks, The Common, was where it was rumored Ralph Waldo Emerson and Walt Whitman strolled, as Emerson tried to convince Whitman to tone down the sexual language in his works. Whitman wrote:

“Each point of Emerson’s statement was unanswerable, no judge’s charge ever more complete or convincing, I could never hear the point better put – and then I felt down in my soul the clear and unmistakable conviction to disobey all and pursue my own way.”